What is all of this fuss about cells?

A cell is the building block of living organisms (what about viruses? are they like Schrödinger’s cat? :p). Cells have all sorts of roles in organisms such as find, obtain, deliver & metabolise nutrients etc. 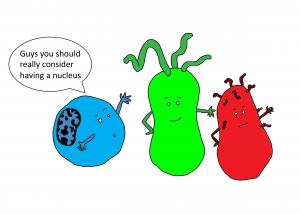 Currently, there are three domains for the classification of life, Archaea, Bacteria and Eukarya. Archaea and Bacteria contain prokaryotic organisms, which are cells without a nucleus.

In the cytoplasm of an eukaryotic cells we can find way more than just a nucleus (Golgi apparatus, Endoplasmic reticulum, mitochondria, ribosomes …). And each of this organelles have a particular function. Three very important components of eukaryotic cells are DNA, RNA and proteins… for those that slept through their biology class here’s a brief summary of what these are!

If cells are the building blocks of living organisms one could argue that DNA is the building block of life itself (at least of life as we know it). That is why Eukarya keep it safely enclosed in a structure called nucleus. But why is DNA so important?

Well, first off, it encodes most of the information cells need to survive. Secondly it is necessary to pass on genetic information for the next generation via replication (Mitosis). Finally, it allows for subtle changes any time it mixes up with another DNA molecule (this is most important for biodiversity) during Meiosis.

What is it made of though? DNA is composed of two complementary strands of a series of four different nucleotides (cytosine [C], guanine [G], adenine [A] or thymine [T]) that form a double helix. It tends to be wrapped up on itself to save space, and this is very important because it makes some parts of it more accessible than others.

The only “downside” of DNA is that is fundamentally the same in all the cells of one organism. Therefore, to allow different cells to perform different activities, there needs to be a way of selecting different parts of the DNA to use.

This is where RNA comes into play

Just like DNA, RNA is made up of a sequence of four different nucleotides but instead of a thymine it has a uracil [U] and is made of just one helix. RNA is synthesised from DNA through a process called transcription but different cells can transcribe different parts. Not all RNAs have the same function and different types follow different kind of maturation processes.

What are genes then?

While DNA, RNA and nucleotides are molecules (or made up of molecules) that we can see and describe, a “gene” is a conceptual model. When people talk about genes they usually refer to parts of the DNA that get transcribed into RNA and either: regulate the transcription of other RNAs or get translated into proteins.

Proteins together with other molecules (such as lipids, carbohydrates…) make up most of the cell components,. Some of them function as enzymes that can be activated with or without RNA. Proteins are made of one, or several, chains of amino acids (which get translated from RNA). Organisms have about 20 amino acids that can be encoded by only 4 different letters (nucleotides).

The genetic code is a set of rules that cells follow to translate nucleotides into amino acids. Think of it as an alphabet with only four letters A,T,C and G. If you made one-letter words you could only make four different words (A, T, C and G). If you had two-letter words you could make 4^2, so 16 different words (AT, AC, AG, CA…). To make at least 20 words(or amino acids) you then need three-letter (nucleotides) words.

If you did the maths right, it will tell you that having three nucleotides encoding for 20 amino acids is a bit redundant…This allows amino acids that are crucial for proteins to be translated by more than one triplet of nucleotide (in case of typos).