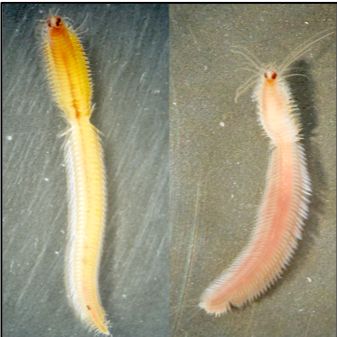 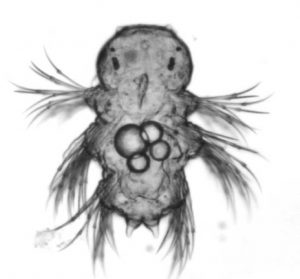 Platynereis dumerilii – Platy, for short – is a marine worm that has long been the focus of neurobiologists and evolutionary biologists alike. Since it evolved more slowly than its more popular invertebrate counterparts (e.g. the fruit fly), Platy is a more reliable witness in the stories of our ancestors. Most notably, it can help tell the tale of the Urbilateria, the hypothetical last common ancestor of all of today’s animals that have bilateral symmetry.

Our ancestors and their brains

The invention of bilateral (left/right) symmetry was a big deal in the animal kingdom some half a billion years ago. In order to have left/right symmetry, you also need to have body axes that define what is up/down, as well as front/back. Defining a front side and localizing the majority of feeding, sensing and thinking functions to it was an evolutionary game changer: it announced the beginning of the era of animals with heads and brains.

Brains turned out to be a great idea and the majority of animals ended up having one (notable exceptions being sponges, jellyfish and corals). To figure out how the earliest ones worked, several labs worldwide, including the Jekely lab (where I am doing my PhD), have put in efforts to establish techniques and build resources that enable us to see the Platynereis brain from different perspectives, in high resolution.

Different stages of Platynereis larvae as seen by electron microscopy

One of the most powerful resources my lab established for looking at the nervous system up close is the connectome – an atlas of neural circuits, the neurons and connections (synapses) between them, in the 3-days-old Platynereis larva.

It was not easy to build the connectome: it is based on serial section electron microscopy, an arduous method that starts with cutting up the Platy larva into almost five thousand thin slices, shooting electrons through each slice and detecting the ones that pass through. The pictures reconstructed from this dataset are black-and-white, overwhelmingly full of details, and at a resolution measured in nanometres. My colleagues in the Jekely lab have spent countless hours going through these images, following each individual neuron through each individual slice in order to find out where it starts, the path it takes, where it ends and what it connects with.

Electron microscopy: an incredible amount of detail in a thin section

The connectome is helping us understand how our worm’s nervous system is organised into modules (circuits) that direct different behaviours. Phototaxis is an exquisite example for this: it is widespread in the animal kingdom to swim/crawl towards or away from a light source. Thanks to the connectome research that the members of my lab have done, when our larvae swim towards the light we know exactly which cells in the eyes respond, which neurons transmit the signal, and where they connect to the responding muscles.

When you’re getting to know a person, you try to find out who they are, where they come from, where they’re going. They become a friend, you get to know their family. You talk about your careers. Time goes by, you grow closer, you discuss life – how did they get to where they are now? What made them become the person that they are?

It’s pretty much the same with Platynereis neurons, really.

In order to truly get to know the nervous system, you need to look at the connectome first – ‘’who’’ the neurons are, where they come from and where they go to, which other cells they are connected with. Then, time goes by, you become friends, you want to find out more about them – their activity/job, their genetic and developmental backgrounds, and, naturally, strategies to selectively and precisely kill off some of them.

During my PhD, I will be exploring different ways to do all that experimentally and writing this blog: stay tuned for my next post about visualising neuron activity with calcium imaging!