Our Principal Investigator participating in the EvoCell Program

The Arnone group aims at studying evolution of organs and body parts by comparison of the Gene Regulatory Networks (GRN) that control the formation and development of such parts in different animals using the sea urchin Strongylocentrotus purpuratus as main model system. An important aspect of this model is the phylogenetic position of this group in the animal kingdom. Sea urchins are echinoderms. Echinoderms, together with the sister group hemichordates, are ancient lineages of living non-chordates deuterostomes. Therefore, they provide an invaluable outgroup for assessment of what is ancient in chordates, what is chordate-specific, what is protostome-specific and represent a key group for studying the origin of deuterostomes. Two other deuterostome models were recently included in our studies: an other echinoderm, the sea star Patiria miniata and a hemichordate, the acorn worm Ptychodera flava, thus enabling for comparative analyses (EvoDevo) and evolution of GRNs studies.

The mission of the Stazione Zoologica is the research of the fundamental processes of biology, which include marine organisms and their biodiversity, in close link with the study of their evolution and the dynamics of marine ecosystems, using an integrated and interdisciplinary approach. The study of the resulting biotechnological applications is part of the mission of SZN. 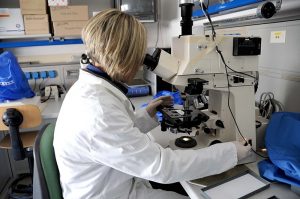 The research in marine biology, apart from fostering progresses in basic knowledge, have often a biomedical impact. Some illuminating examples are the Nobel Prize for Physiology or Medicine obtained by eminent scientists for their studies on marine organisms. The recent sequencing of the genomes of some marine organisms and the increasing ease of obtaining new ones, the ability to use new methods of so-called reverse genetics and advanced microscopy, open new frontiers of investigation in the field of Biology. In addition, the exploration of biodiversity in the seas is a sector, which will be considered increasingly fundamental for the advances related to the knowledge of basic biological mechanisms, of new bioactive substances and the mechanisms involved in the global climate balances.

Among national and international Research Institutes, the peculiarity of the SZN derives from some key characteristics:
• The co-existence of biological and ecological research, key elements for a comprehension of the overall balance of the marine environment and the basic mechanisms that govern it.
• The capability to benefit of a multidisciplinary approach including genetics, cellular and developmental biology, physiology, ecology and oceanography.
• The capability to explore and develop methodologies and experimental protocols that represent a reference point for important researches transferred in other system and/or organisms.
• The competences on a wide range of organisms, which allow the SZN researchers to face ecological problems by evaluating the biological component in its complexity.

Apart from this specific research activities, the mission of the Stazione Zoologica – in accordance to its tradition – is nowadays to:
• provide access to marine organisms for the international scientific community;
• provide qualified consultancy to public Institutions;
• provide advanced training.

In particular, the ability to develop research activity and at the same time to provide specialized scientific services with a high technological impact and with a multidisciplinary approach, represent the strength of the Stazione Zoologica Anton Dohrn; this characteristic makes the SZN unique among the national research institutes.

The Stazione Zoologica Anton Dohrn aims at consolidating its role by being a national and international reference point in marine biology.

We believe that marine biodiversity is the greatest source of knowledge yet unexplored of the planet and that the research that will be carried out in the coming years will provide a major contribution to the advancement of knowledge and new tools for sustainable development.

The development of new technologies that allow us to study the biology of organisms from molecules to global offer unprecedented opportunities for research. These opportunities can be grasped by acquiring the best equipment and facilities for research, accepting the challenge of the complexity characterizing the living and stimulating human resources capable of turning research into data, and data into knowledge. Significant progresses have been made over the past three decades, in terms of integration of the knowledge and multidisciplinary of the approaches, but still much remains to be done to fully exploit the potential offered by the integration of scientific potentials.
The SZN intends to seize this opportunity, on one hand, by further implementing the collaboration with other research sectors (geology, chemistry, physics, economics, engineering), while enhancing its multidisciplinary expertise in the Field of Biology (currently, including marine and fundamental biologists, biologist of reproduction, developmental biologists, zoologists, botanists, ecologists, eco-physiologists, behavioural biologists, evolutionary biologists, geneticists, biochemists, bioinformatics and others).

Marine Biodiversity: towards innovative and integrated approaches.
Marine model organisms: for studying several key topic from the biology and ecology to the biomedical research
Marine Genomics: understanding the structure and function of genes in organisms of the Mediterranean.
Biological Evolution: Integrating Epigenetics, genetics, ecology and behavior.
Adaptation to extreme marine environments: new opportunities for knowledge of the limits of life.
Marine Biotechnology: for industry, food, medicine and biotech for remediate environmental problems.
Global changes: to understand and predict the response of marine ecosystems with a focus on the Mediterranean.
Conservation: protect the biological resources and the environment and ensure a sustainable Blue growth.
Energy: towards alternative and renewable sources from the sea.